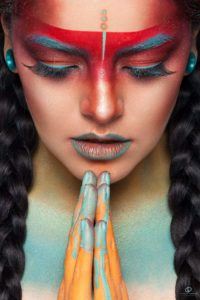 This week we are featuring a very unique Las Cruces artist, Anahy Nunez. Anahy is a freelance artist and co-owner of Atom Bomb Studio which started in 2012. Her large social media presence shows with thousands of likes on her Facebook page and 29.5K followers on Instagram.

What started as face painting for Dia de los Muertos and constant sketching morphed to become Anahy’s passion in body art. After seeing fully painted models she immediately found her art niche, “There’s really no [words] to explain how exciting it is for me.” Anahy’s inspiration comes fro

m her family and friends, “I guess you could say I took the saying ‘paint what you know’ to heart.”

Her advice for upcoming artists? Don’t give up. Draw something everyday. When you find yourself hating your own work just keep going. It’s not easy but it is so worth it.

One of Anahy’s favorite works is The Harley Queen (right image), a design based off of Queens you find on a playing cards. What is special about this design is the collar is made of real playing cards that form a heart. Another favorite of hers is Talavera (left image); This design, made for her friend Lola, took inspiration from hand painted Mexican pottery  found in her backyard.

You may recognize Anahy’s work from the Dia de los Muertos cover of Las Cruces magazine (shown below) and also at downtown businesses. Her artwork was the face of Beck’s coffee limited Café de los Muertos blend and she has also partnered with Mas Art. When asked what she loves most about downtown she said, “Everything! The history, the people, the events, the Farmer’s Market, I could go on and on.” DLCP loves having an artist as innovative and talented as Anahy in the downtown community. 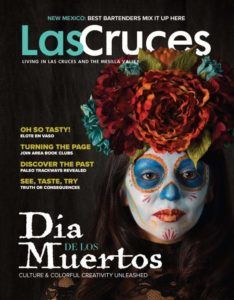 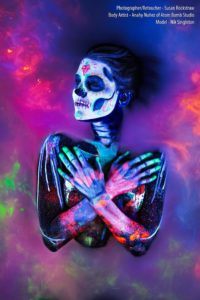 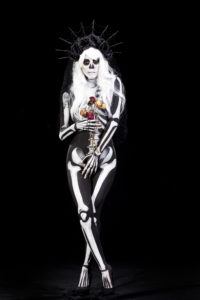 Campo Compound Clean Up and The Façade Squad